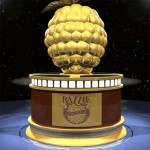 By now you know that Sandra Bullock won the Oscar for Best Actress Sunday night.  Her acceptance speech was humble and touching and she looked fabulous.  But did you know that she also received another prestigous award on Saturday and by winning both back to back she actually set a record?

On Saturday the annual Razzie Awards were held in Los Angeles to celebrate the very worst Hollywood has to offer.  Bullock was nominated for her performance in All About Steve and, in keeping with her self-depricating humor, she showed up to accept.  She was charming and her appearance was the highlight of the evening.  You can check it out below.  And, yes, she is the only actor to win an Oscar and a Razzie in the same year.

Posted on March 8, 2010 by Chick 1 in Randomness Leave a comment