Silence in the Library/ The Forest of the Dead

As Doctor Who is my new obsession, I’ve been wanting to start reviewing episodes.  I’ve seen the whole 1st season (of the New Series) and all of seasons 5 & 6 (so far) but although the Tenth Doctor (David Tennant) is my favorite (“You never forget your first Doctor.”), I’ve only seen a smattering of seasons 2-4.  This 2 parter was one of the first Doctor Who episodes I watched.  Having seen it again recently while introducing my friends to the series, I decided to start my reviews here.  (Enough parenthesis for ya?)

The Basics: The Doctor and current companion, Donna, answer a call for help in a massive library that is actually a man-made planet.  There they find a team on expedition led by Professor River Song (Alex Kingston), a computer that has “saved” 4022 people, a child who may or may not be in charge of the library, and swarms of flesh-eating aliens in the shadows.  Ya know, typical Doctor Who fare. END_OF_DOCUMENT_TOKEN_TO_BE_REPLACED 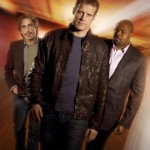 I have been excited about this new Fox TV show because it comes from the producer, Simon West, and star, Mark Valley, of the short lived Keen Eddie.  Keen Eddie was brilliant conceptually, but most likely got cancelled after only 13 episodes because its script couldn’t keep up with the high bar set by its production value.  Ultimately the great characters and slick flash cuts were not enough to keep it on the air.  I had high hopes for Human Target, thinking perhaps Simon West had brought along better writers.  END_OF_DOCUMENT_TOKEN_TO_BE_REPLACED