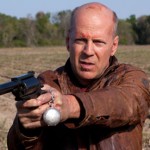 Script: A-   Not quite but almost predictable.  But not until it happened did I realize that’s what was going to happen.  ;)

Hotness of Cast:  A (would have been an A+ except Joseph Gordon-Levitt is actually hotter as himself than he is as Bruce Willis)

Location/Setting:  A  Again, believable as the not too distant future.

Climax:  hands-over-eyes A, but I did utter the phrase, I knew it.

Joseph Gordon-Levitt and Bruce Willis playing the same character at different ages?  Yes, please!  Throw in some Emily Blunt and time travel and I am there.

Gordon-Levitt plays a hitman who kills targets sent back from the future.  But one day the target sent back is…him.  Oops.  Check it out.

Looks a litte intense for me but there are enough people I like to get me there.  Director Rian Johnson wrote the script.  He also directed two other movies that I haven’t seen but have always wanted to; Brick (a film noir set in high school and also starring Gordon-Levitt) and The Brothers Bloom (quirky caper with another amazing cast).  Time for a viewing party.

A couple of interesting blips popped up this week.

The Last Airbender:  M. Night Shymalan is currently directing the movie version of Nickelodeon’s series of the same name.  I’ve never seen it so I have no idea what it’s about but I’m glad to see Shymalan branching out.  END_OF_DOCUMENT_TOKEN_TO_BE_REPLACED

Old News: I’ve mentioned my excitement over the upcoming sequel to Emma Thompson’s Nanny McPhee here.  Last month we learned that Maggie Gyllenhaal has been cast in the project.  I think Maggie is delightful and I’m so glad to see her joining Emma.  There aren’t any details on her part but my completely uneducated guess is that she’ll be playing the mother of the family that needs Nanny McPhee’s touch. END_OF_DOCUMENT_TOKEN_TO_BE_REPLACED