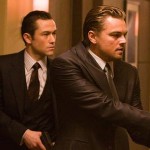 This has been one of my most anticipated movies of this year (and that includes Iron Man 2).  The first trailer was so intriguing, and considering director Christopher Nolan’s ability to beautifully weave intricate plots with complex themes, when the big marketing push started a few weeks ago, I purposely avoided the new footage so I wouldn’t figure anything out.  I’m glad I did but turns out, it didn’t matter.

The Basics: I’m not gonna tell you.  Just let me advise you to bring something to take notes so you can keep up.  If you want more details watch the trailer here.


What I Liked:  Honestly, my brain hurts…but oh, how it hurts so good.  I’ve been thrilled about the cast (come on!  Leo, Joseph Gordon-Levitt, Ellen Page, Ken Wantanabe, Michael Caine, Lucas Haas!) since the trailer.  The physics-warping script did not disappoint and somehow, Nolan keeps all the plates spinning like a good magician, keeping our attention where it needs to be.  The score (by personal fav Hans Zimmer) is intense but works well; I didn’t even notice how heavy it was until the end credits.  And the sign of a good movie, at least for me, about half way through I realized I had seen most of the freaky footage in the trailer and still had no idea where this was going.

What I Didn’t Like: I am abandoning this section in this review, nothing to write. Instead we look at:

Movies That Inception Draws Elements From Without Ripping Off (It’s Still Totally Original):

Addendum:  OK, I did think of something for my What I Didn’t Like section but it’s kind of a SPOILER so read at your own risk.  The bad guys obviously graduated from Stormtrooper Marksmanship Academy.  So many times the good guys should be shot…dead…several times over.  I’m willing to suspend my disbelief somewhat since…the bad guys aren’t real and Juno is controlling the physics of the world but….