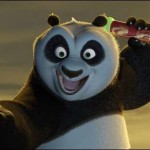 I can’t believe I’ve never reviewed this movie. I adore it!

What I Liked: Obviously, most everything. This movie has what most great movies have going; it’s strengths are spread evenly across several areas. First, a fantastic script. It’s funny, well-paced, irreverent, and at its heart, wise & sweet-spirited. Second, the animation is gorgeous, playing off many of the traditions of kung fu movies and making them even more epic and drawing inspiration from many forms of eastern art. Third, the cast is fantastic. I think Jack Black is funny but he can wear on my nerves. But here we have all the things I love about Black with none of the gross parts. His character is instantly relatable; an extremely average person with dreams of grandeur. The first time I saw this I didn’t realize Dustin Hoffman was the kung fu master but responded to his voice with total trust. The cast of characters give great performances, both vocally & visually. I particularly love Po’s (the panda’s) father who is in fact…a duck? This is a running gag that the script & actors dance nimbly around, rounding out Po’s dad as a clueless but kind-hearted parent. Fourth, what’s a kung fu movie without action? And this has plenty! Both larger than life fights & inspiring (& funny) training montages. Finally, even the music is great!

What I Didn’t Like: The only tiny complaint I could make is that Jackie Chan, cast as one the the Furious Five, is extremely difficult to understand. Thankfully, his lines are few.

Bottom Line: Almost a perfect movie. It hits the mark it is aiming for.