Silence in the Library/ The Forest of the Dead 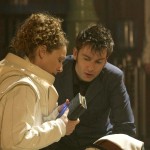 As Doctor Who is my new obsession, I’ve been wanting to start reviewing episodes.  I’ve seen the whole 1st season (of the New Series) and all of seasons 5 & 6 (so far) but although the Tenth Doctor (David Tennant) is my favorite (“You never forget your first Doctor.”), I’ve only seen a smattering of seasons 2-4.  This 2 parter was one of the first Doctor Who episodes I watched.  Having seen it again recently while introducing my friends to the series, I decided to start my reviews here.  (Enough parenthesis for ya?)

The Basics: The Doctor and current companion, Donna, answer a call for help in a massive library that is actually a man-made planet.  There they find a team on expedition led by Professor River Song (Alex Kingston), a computer that has “saved” 4022 people, a child who may or may not be in charge of the library, and swarms of flesh-eating aliens in the shadows.  Ya know, typical Doctor Who fare.

What I Liked:  There’s a lot to like about this epic episode.  (Although aren’t most Doctor Who episodes epic?) It’s really a game-changing set-up for what Steven Moffat, soon-to-be head writer and executive producer of the series, was going to do with our beloved Doctor.  Of course the main development here is the introduction of River Song.  I can never decide if I like her name or think it’s ridiculous.  When I first saw this, none of season 5 and forward had aired.  Now, looking back,  I’m even more impressed and intrigued by how much was brewing in Moffat’s brain even then.  Not just the diary, (Which by the way, was the completed version just left in the library?  Wonder if that will come up again?) but many aspects of  River’s personality and relationship to the Doctor, complicated by time travel, are given a solid foundation.  And after watching season 6, I’m very curious about the fact that River’s first appearence is in a suit that looks a great deal like a NASA astronaut suit.  Foreshadowing?

The story is populated with likable characters.  I agree with the Doctor; I like Anita.  The little girl was well cast and well directed.  She could have been an annoying child but even in her distress and tantrums I sympathized with her.  And I love that they subverted the One Steve Limit trope with Proper Dave and Other Dave.  Tennant is brilliant as always.  The Doctor gives him a wide and sometimes frenetic range with which to play and the River Song interaction adds even more depth to this.  (Oh, snap!  I liked that moment, mostly cause Tennant is just dishy!)  And this episode contains one of my all time favorite Badass Boasts; “I’m The Doctor and you’re in the biggest library in the universe.  Look me up!”

This storyline has a lovely dose of tragedy as the best of Doctor Who usually does.  Donna gets to show her hand at drama and as for River, let’s just say the women don’t fare too well here.  Great moment though.

What I Didn’t Like: With a show as over the top as Doctor Who, it’s a fine line between campy, scary, and just plain annoying.  The first time we encounter the “ghosting transmitter” it’s scary and disturbing and rightfully so.  It’s fun at first during the chase but then…”Hey! Who turned out the lights?”  “Donna Noble has left the library.  Donna Noble has been saved.”  Shut up!

Silence in the Library and The Forest of the Dead were filmed in a library in Swansea, Wales.  The location is simply gorgeous and the set is beautifully lit by cinematographer Rory Taylor.  But it doesn’t really work for an episode where ”Stay out of the shadows” is key to staying alive.  It’s difficult to tell where the shadows begin and end.  I don’t usually vote for the the stupidity of the audience but I needed a little more definition here please.

Bottom Line: Classic Doctor Who, Classic David Tennant, Classic Steven Moffat.  In case you didn’t know, all of those are good things.   This episode is a great introduction into the world of Doctor Who for newbies and a well rounded meal for dedicated fans!