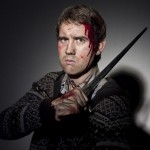 This week on Troperiffic Tuesday we take a look at one of my all time favorite tropes, an oldie but a goodie. I love it because it nearly always evokes an emotional response from me and most audience members. Let’s discuss Took a Level in Badass.

See that person standing in the corner over there? You didn’t? Oh right, because you were watching the hero. Well, wait until the third act when the hero is about to be killed and that wallflower decides to kick somebody’s teeth in so the hero can complete his quest. Yea, that moment will stay with you.  And that is the essence of Took a Level in Badass.

As with many tropes, Took a Level in Badass is accurately named. A character becomes (or is sometimes revealed to be) tougher than previously thought and this revelation usually comes at just the right moment. There are a bazillion examples; Neo goes from computer programmer to messiah-like warrior, Luke goes to whiney farmboy to somewhat less whiney Jedi knight (who can pull off a black floor length cape fairly well) , Jackie Chan goes from lovable loser to kung fu superstar in almost every movie he’s in. These and many more are listed on this trope’s page on tvtropes.org. But I don’t think any of them should count.

Yes, each of these characters got tougher but each was the hero of their particular story. In my opinion that makes their new level of badassery a part of the hero’s journey. I believe the heart of this trope should be reserved for secondary characters,  the sidekick, the true underdog. Many heroes start out as the underdog but because they’re the hero, we know they’re going to come through. Sidekicks on the other hand, have different roles to fulfill. Sometimes they’re the Plucky Comic Relief. Sometimes they’re the Heroic Sacrifice. Sometimes they’re the Love Interest.

I find that Took a Level in Badass is most satisfactory when it is used with a secondary character. It’s the rising of the underdog that is so powerful. Most of us see ourselves as underdogs so to see one triumph so decidedly or attain such a moment of glory, we can’t help but cheer. We’ve all had those moments, big and small, when we’ve wanted to put the bully in his place or stick up for someone else but just didn’t have the bravery or the skills. When a secondary character steps up to the plate and knocks it out of the park, we are living out our own fantasies.

I had personal experience with this in a play I was in a few years ago. The narrator of the story was a young squire who was trying to become a knight. The writer/director had originally planned to cast a young knight-like actor for the part. But someone suggested he cast against type and he embraced the idea, casting someone who was somewhat dorkier and, um… pudgier. The moment that character was knighted never failed to get a huge cheer from the audience every single performance. I saw it a few years later with a dashing young man as the squire and guess what? No cheer.

Doctor Who excels in characters who develop kick ass skills.  In fact two companion’s boyfriends fit this trope perfectly.  From Mickey’s very first episode he was definitely an abused and soon forgotten boyfriend.  The moment Rose met the Doctor, Mickey took second place in her life and lots of ridicule from the Doctor.  But as his frustration with his place as number two in both Rose’s and the Doctor’s life grew so did his determination to prove himself.  When they stumble on an alternative universe and his counterpart is killed, he decides to stay to take up the fight.  When he returns a few episodes later, he’s a man on a mission, serving as a secret agent.  By the time the Doctor was near regeneration (and the close of this Doctor’s reign) Mickey was a full fledged agent, fighting aliens with his wife, another former companion.

Then came Amy and her boyfriend Rory.  Like Mickey, Rory was overshadowed by the Doctor.  Unlike Mickey, he managed to eventually win his true love.   Rory started out as such a bumbling dork that he was killed off not once but five times.  (Welcome to the world of Doctor Who.) But his extreme loyalty to Amy produced one of the most romantic Who storylines ever and earned him the nickname The Last Centurian.  Rory rose to such heights of badassery that when Amy is describing to her baby the man who is going to rescue them, it seems that she is describing the Doctor but no, she is speaking of  plain old earthling, Rory Williams.

Other characters who follow this path are the Hobbits in Lord of the Rings, especially Merry and Pippin who basically start out as the party hobbits but are seasoned warriors by the end of their adventure.  The Queen in Shrek 3 qualifies when she crashes a stone prison wall… with her forehead no less.  The Harry Potter universe is full of these characters like both the Weasely women, Molly and Ginny.

But my very favorite Took a Level in Badass trope is Harry Potter character Neville Longbottom.  From day one Neville is the guy that gets picked on, the one who can’t perform the spells, the dork who dresses like an elderly Mr. Rogers.  In many ways his story is as tragic or even more so than Harry’s.  As an infant, his parents were tortured to the point of insanity and now do not recognize him.  And it’s even hinted that the prophecy that led to the death of Harry’s parents may have been about Neville as well.  He is raised by his well meaning but stern grandmother.  He is loyal and brave but even he doesn’t feel he’s worth anything.  But beginning with The Order of the Phoenix, Neville starts to come into his own.  By The Deathly Hallows, he has stepped into Harry’s role as leader of Dumbledore’s Army and proudly shows off his bruises and injuries suffered as a result.  In the final battle, when Harry gives him the task of destroying the horcrux snake Nagini,  Neville accepts this task without even flinching.  As one writer put it, “he practically says, ‘Sure, would you like fries with that?’”  The moment that Neville kills the snake is a true Crowning Moment of Awesome and never fails to get cheers and tears from the audience.

So what underdogs do you love to cheer for?

Wait, did Rory just punch Hitler in the face?

Oh, and guess what, Voldemort.  You’re mortal now.  Thanks, Neville!

2 Responses to Troperiffic Tuesday: Took a Level in Badass