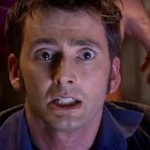 I have a friend who is an engineer.  When he was a child, he took apart a telephone just to see how it worked.  That is a great example of what the Deconstruction trope is all about.  We take apart a trope, a character, a genre, or even a series to see what makes it tick.  Or what would happen if we did…this?

Deconstruction is an idea that is used in many disciplines besides storytelling but the goal is the same; to gain a better understanding of something by disassembling it. One of the most popular types of narrative Deconstruction is to ask what would happen to this trope, character or plot device if the rules of Real Life applied to it.  As Deconstruction often, not always, comes across as darker it can sometimes be interpreted as an attack on whatever is being deconstructed.   But it can give us a better understanding of how things work and an even bigger appreciation for tropes, characters, and stories we already love.

One of my favorite Deconstructions is an episode of  Doctor Who called Midnight.  In this episode, the Doctor is stranded with a small group of tourists on a shuttle when an unknown force begins to attack.  This is where the Doctor would normally step up and save the day, winning the gratitude of those he rescues. But things don’t go very well for him.

For starters, he is minus his human companion.  The Doctor almost always has a human companion to stand in for the audience (“Don’t try to follow along; just nod when he pauses for breath.”) and sometimes lampshade tropes (“He saves planets, rescues civilizations, defeats terrible creatures, … and runs a lot. Seriously, there’s an outrageous amount of running involved.”).  But take away his human companion and the cracks begin to show. Without someone to say, “This guy really is alright,”  (and no corridors to run down) all of the characteristics that make the Doctor who he is, his wit, his intelligence, his confidence, his belief that all life is valuable, and above all his belief that humans when encouraged will do the right thing work against him.   He comes across as arrogant and as he tries to ignite excitement among the group that they have discovered a new lifeform, the fearful tourists become more hostile.  Even his quirky use of the alias John Smith comes back to bite him in the butt.  By the end of the episode he is very nearly killed by his beloved humans. Instead of the normal upbeat ending, the story ends with the Doctor shell shocked and broken.

The episode is a fantastic Deconstruction of the Doctor himself as trope after trope that makes him a hero turn him into a villain in the eyes of the other passengers.  It was even a bit of a Deconstruction of head writer Russell Davies who tended to write villians that were very campy and moustache-twirling.  But in Midnight we not only never see the threat, we never find out what it was at all.  That type of freakiness is more characteristic of current head writer Stephen Moffat.

It could seem that in an age when audiences want more realism (or certain types of realism) that Deconstructions have become more popular.  But really every generation creates their own Decontructions of tropes and stories that they love.

The Great Gatsby is a Deconstruction of the American dream and the lavish lifestyle of The Roaring Twenties.

One could argue that Batman, especially Christopher Nolan’s movies, is a Deconstruction of Superman and other super heroes.  And Watchmen deconstructs the entire genre.

There’s a great Simpson’s episode that asks the question “How would a real-life person respond to Homer’s idiocy?”  The writers introduce Frank Grimes (or Grimey as he liked to be called) who eventually goes insane and dies.

The Shrek franchise is a Deconstruction of the fairy tale genre and Ever After takes a look at how Cinderella would play out without the magic, with Leonardo Di Vinci as her fairy godmother no less!

So what Deconstructions helped you see in a new light?