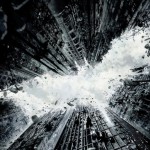 I think I’m in love…with Christopher Nolan.  Dense plotlines, complex characters, nuanced performances; those are the way to win this girl’s heart!  And Nolan delivers.  At one point I wondered if I were watching the perfect movie.  The answer is no; it’s not the perfect movie.  But it is fricking fantastic!

Not that this love will interfere with my slightly inappropriate crush on Joseph Gordon-Levitt. There was one point during the movie that I wanted to literally lick his face. (Is that too much information?)

The Dark Knight Rises is packed with exciting plotlines, action set pieces, and tension.  It’s populated with rich, interesting characters played by rich, interesting actors and a healthy dose of second tier bad guys thrown in to twirl their proverbial mustaches.  Nolan has a lot to juggle here but deftly handling detailed stories is kind of his specialty.  The movie does occasionally groan under the weight of all that’s going on.  But in the hands of a lessor director, all these elements would have dissolved into a big, messy, Spiderman-3-style catastrophe.

As usual, Nolan examines the hero and villain in all of us and what circumstances cause us to choose one side or the other at different points in our lives.  What’s nice about these movies is that even the smallest of characters generally have their moment and/or comeuppance.  And the continuity between all three movies is fun, including some brief appearances of actors from the past.

Before seeing this, I was least convinced of Anne Hathaway’s role as CatWoman but she won me over as a bad girl I can admire. Michael Caine managed to make me cry not once, not twice but three times!  Darn it, Alfred!  I’m sad to say that the most tedious parts (and let me clarify that “tedious” in a Christopher Nolan movie equals “pretty good” in a lot of other movies) is Christian Bale as Bruce Wayne/Batman.  Perhaps because for a Batman movie, there’s not a lot of, ya know, Batman.  When he did suit up for the final act, my response was, “Finally!” and not in a good way.  And even the big showdown between him and Bane was kind of flat.

There are enough twist and turns to keep the tension high though.  In fact, about two thirds of the way through, there was a particular actor that I was thinking was really wasted in their role but Oh no!  I didn’t see that coming!  And the end is peppered with lovely little surprises.  Don’t get me wrong; this is a superhero movie not a Shymalan thriller but it’s not often that I get really surprised.

And did I mention the score is perfection?  I might have to leave Christopher Nolan for Hans Zimmer.  I’m fickle like that.

I do have to mention that in light of the shooting in Aurora, CO there was one scene in particular that was extremely difficult to watch as Bane is beginning his endeavors.

Bottom Line: A little long but more than lives up to the title Movie Event of the Summer!