Review: The Hobbit: An Unexpected Journey 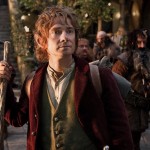 First off, Martin Freeman is fabulous.  It now seems rather obvious that he was meant to play Bilbo Baggins but two years ago, Peter Jackson was so convinced that he rearranged The Hobbit shooting schedule to accommodate Freeman’s Sherlock schedule.  Freeman brings so much complexity and charm, insecurity and common man sensibility, excuse me, hobbit sensibility to Bilbo that he continues to grow and grow right in front of you; as any great protagonist should.  Of course some of that credit should go to Tolkien himself, the screenwriters, and Jackson’s direction.  But it’s Freeman who wins our hearts on that huge screen.

Secondly, I may have found a musical theme that rivals the Indiana Jones theme.  Ya know the feeling you get when the Raiders theme punches up under the action and Indy starts doing his thing?  Well, I already associate that thrill with the dwarves and their Misty Mountain song.  First sung by the dwarves in Bilbo’s home and used in the trailer to give faithful fans goosebumps, it is used as an action soundtrack throughout whenever the dwarves starting kicking some ass.  And kick some ass they do!

After this you have a lovely little story populated by both familiar friends and enemies and quite a few new ones.  Naturally the visuals are stunning, combining layers and layers of real and CG footage to create stomach dropping camera moves.  And of course, the natural New Zealand landscape needs little embellishment!

Other shoutouts go to Richard Armitage, who somehow manages to make dwarves sexy, and the rest of the entourage who, like the Fellowship, hit all the right notes acting-wise.

If I have one complaint it is that The Hobbit should have been two movies instead of three.  There are places where it lags a bit especially in the first 30-45 minutes.  It does sometimes suffer from that “sequel curse”, seeming to rely on the audience’s affection for familiar characters and not getting on with the story.  But don’t let that put you off.  An Unexpected Journey is still worthy of a trip to the theater.  In fact, I’m already planning a second (or third) viewing.

There are thrills and laughter and surprises and reunions with dear friends and new friendships that surprise and inspiring feats and tears and best of all, the slow revelation of the simple courage that hobbits have buried within them.

2 Responses to Review: The Hobbit: An Unexpected Journey