I’m happy to report that a huge number of the original cast are returning, at least appropriate cast.  END_OF_DOCUMENT_TOKEN_TO_BE_REPLACED 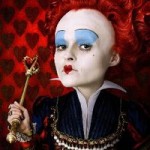