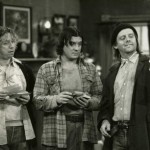 This week’s trope is once again an example of how the world of fiction often doesn’t (and possibly shouldn’t) mirror the real world.  Ever notice how in most books, TV shows, and movies no one has the same name?  But in the real world people share first, last, or both names all the time.  There is a very important reason that it doesn’t happen often in fiction; it’s confusing.

When you are creating a story and the universe in which your characters will live, everything is completely new to your audience, even if the plot takes place in modern day America.  And there are a lot of details to keep track of.  Having two characters with the same name or even similar sounding names, even if it is more realistic, will just muddy the waters. (Anyone else wonder in Lord of the Rings if they were talking about Sauron or Saruman?)  Thus almost all fictional works have a One Steve Limit.

This trope is so prevalent that it’s easier to point out exceptions instead of examples.  Having two characters share a name is usually used for comedy although it can be played for drama as in The Two Jakes or The Big Lebowski, in which a case of mistaken identity sets off the entire plot.  Inside Man subverted this trope by having all the bank robbers go by some form of Steve. (Yes, they actually picked “Steve” as their common name.)  A common name was one of the characteristics of the ruling clique in the movie Heathers, although this could be considered an example of the subtrope Planet of Steves, where a common name is used to demonstrate lack of individuality or personal freedom.

On a lighter note,  we have the classic from Newhart. “I’m Larry. This is my brother Daryl.  This is my other brother Daryl.”  Made all the sillier in that it’s not just coincidence; their parents actually gave them the same name.

An episode of Doctor Who encountered a group with two Daves.  They went by Proper Dave and Other Dave.  Neither fared very well in the adventure.

The clever title of The New Adventures of Old Christine uses a subversion of this trope when the titular character’s ex-husband marries another woman names Christine.  See how confusing that can be?