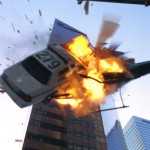 Welcome back to Troperiffic Tuesday!  This week we take a look at one of my favorite action movie tropes.  When in a tight spot, the Hero often has to improvise a way to defend himself or others.  He may not have a weapon; maybe he’s the kind of Hero who Doesn’t Like Guns (a la MacGyver).  If he and his entourage are trying to escape, they may turn to one of the biggest and most easily obtainable weapons around, the car.  Let’s hope our Hero is skilled in the not-so-ancient art of Car Fu.

The action movie genre comes with a pretty standard set of expectations and limits so writers and filmmakers are always looking for ways to get more creative with their action sequences and the Improvised Weapon is a way to do that.  Jason Bourne (Matt Damon) is a master of this, having killed people not only with a car but with a pen, a magazine, and a towel.  Rick O’Connell (Brendan Fraser) in The Mummy even managed to take down an escaping baddie by throwing a chair at him.

Car Fu is a subtrope of the Improvised Weapon.  Car chases are a staple of action movies and if you can come up with creative ways to use them all the better.  I was first turned on to Car Fu by the movie The Peacemaker.  George Clooney used his car to take down several bad guys in a crowded European city, even using the bare rim on his busted wheel to generate sparks to ignite the gas from the other vehicle.

The aforementioned Bourne Series used Car Fu in the 2nd and 3rd installments.  Bruce Willis drove a car into a freaking helicopter in Live Free or Die Hard.  (OK, that one was ridiculous but…it’s Bruce Willis!)  James Bond often uses his car as a weapon but that’s a little bit of a cheat, isn’t it?  Q has usually designed it as a weapon.

Happy Hogan saved Tony Stark in Iron Man 2 by pinning the baddie with his limo.  And Mr. Incredible actually threw a car at the bad guy in The Incredibles.

So get creative and tell me your favorite Car Fu moments!