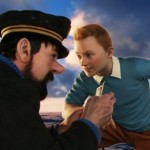 The Basics: Based on a Belgian comic book series popular during the 1930′s, the story follows the  many adventures of its title character, Tintin (that’s pretty much what it says) an intrepid young reporter.  END_OF_DOCUMENT_TOKEN_TO_BE_REPLACED

Add to this the romantic comedy season leading up Valentine’s (a genre I’ll talk about in an upcoming blog) and choices at the theater can seem kind of bleak. END_OF_DOCUMENT_TOKEN_TO_BE_REPLACED