What do the Ark of the Covenant, the Maltese Falcon, and Unobtanium all have in common?  They are all versions of the MacGuffin, one of the most commonly used tropes of all time.  The MacGuffin is simply what they are after; what the hero is chasing, trying to find, or trying to protect.

The MacGuffin has been a trope in stories for as long as there have been stories (see the Golden Fleece in Jason and the Argonauts) but it was first given its name by Alfred Hitchcock who credited one of his screenwriters with the term.  The MacGuffin is the external motivation for the hero’s journey but has little to do with the hero’s actual character arc.  In its purest form, the MacGuffin could be replaced with any other item and the story would remain essentially the same. END_OF_DOCUMENT_TOKEN_TO_BE_REPLACED 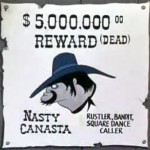 This week on Troperiffic Tuesday, we take a look at a very old trope, used as a comic element long before our modern obsession with tropes.  So what’s so funny about Arson, Murder, … and Jaywalking?

There is a certain structure and rhythm to comedy.  I am not remotely educated in the craft of comedy which you will discover as you read the rest of this sketchily researched article but I will attempt to give some foundation here.  There are as many different structures for jokes as there are genres and it’s not just for sitcoms and stand up comedians.  Action movies and dramas need humor too in order to release the tension. END_OF_DOCUMENT_TOKEN_TO_BE_REPLACED