Review: Pirates of the Caribbean: On Stranger Tides 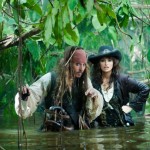 The fourth installment of the Pirates franchise has Johnny Depp & a few minor characters returning while picking up a lot of new players.  Have they been able to capture the magic again?

The Basics: Let’s start with a rundown of the previous Pirates movies.  I really enjoyed the original, The Curse of the Black Pearl.  Sure, it had some script/pacing problems in the third act.  But at its heart it was a pretty good mindless action movie.  Then adding Johnny Depp’s serendipitous turn as Jack Sparrow (that’s Captain Jack Sparrow) turned it into a blockbuster and a blast!  END_OF_DOCUMENT_TOKEN_TO_BE_REPLACED

5:50 pm: All six children from the cast of Slumdog Millionaire being interviewed by Ryan Seacrest.  Was that not the most adorable thing ever?!  I could have eaten them all for dessert.  Closely followed by the other cast members from Slumdog, all humble, excited, and a little giddy.  And they seem to handling the whirlwind surrounding their film quite well.  I hope this movie wins Best Picture! END_OF_DOCUMENT_TOKEN_TO_BE_REPLACED