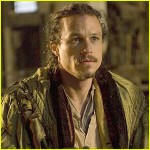 You probably already know that when Heath Ledger died tragically two years ago, he was in the middle of filming the Imaginarium of Dr. Parnassus.  The creative team behind the film, led by director Terry Gilliam, came up with what I think was an inspired solution to losing their star.  Apparently, the story involved Ledger’s character going through a mirror (a la Alice) three times.  When Ledger died, he had completed filming almost all the scenes on one side of the mirror.  END_OF_DOCUMENT_TOKEN_TO_BE_REPLACED

Old News: I’ve mentioned my excitement over the upcoming sequel to Emma Thompson’s Nanny McPhee here.  Last month we learned that Maggie Gyllenhaal has been cast in the project.  I think Maggie is delightful and I’m so glad to see her joining Emma.  There aren’t any details on her part but my completely uneducated guess is that she’ll be playing the mother of the family that needs Nanny McPhee’s touch. END_OF_DOCUMENT_TOKEN_TO_BE_REPLACED